I’m going to start with the wow. This week has been amazing. When I wrote the post below, I expected about four people, all of whom I knew personally, would read it & say nice things to me about it. As of today, 213 people have viewed that post, & 110 people have shared it on Facebook. That is INSANE. Only 9 of my own Facebook friends shared it, so I don’t know who you other 101 people are, but THANK YOU. I can’t describe how it feels to know that people took the time to read what I wrote, & felt like sharing it afterward. You are amazing & I heart you.

So, I read a lot. Never as much as I want to, but still quite a bit. And while I’ve got a Goodreads account to keep track of what I read, I rarely do more than assign a star rating to a title once I’ve finished it. I get caught up in “why am I writing this review?” & “who is reading this review?” & “shut up, you write too much.” But now that I’m trying to put this lovely stretch of Internet to good use, I figured out the why and the who (unfortunately, still working on the shutting up). These book reviews are for teachers who are readers. They include my reader reaction, my teacher reaction, and how I think the book would fit into a classroom. And they come with a handy abstract that gives you all the key points, so you can check out the details only if you feel moved to do so! First up: Fat Angie. 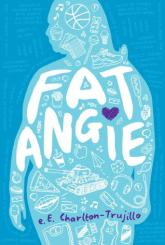 In short… Fat Angie is an intense, eye-opening, gritty novel about bullying, loss, death, and depression, that still manages to be uplifting, entertaining, and amazing. While the author tries to take on a lot in one novel, it does not prove to be so much that the characters and their triumphs are overshadowed. Put this book in your high school classroom library for Independent Reading, use an excerpt to start a whole-class discussion of bullying, respect, families, or self-love, or incorporate it into literature circles or book clubs. See below for an in-(too-much-) depth review!

The book… Fat Angie, e.E. Charlton-Trujillo’s third novel, focuses on Angie: fat, depressed about her missing sister, taunted by her classmates, antagonized by her adopted brother, mother, and therapist. Her sister enlisted in the Armed Forces when she graduated, and shortly after disappearing in Iraq, resurfaced in a video – bound, blindfolded, believed beheaded. Everyone, except Angie, believes she is dead. Angie’s reaction to her sister’s disappearance only adds fuel to the fires of her particularly cruel tormentors at school, and makes life at home harder. Things start to change when an exotic new student, KC Romance, takes a shine to Angie, shifting the way Angie sees herself, and how the people around Angie see her.

As a reader… To talk about Fat Angie, I have to begin with a story. When I was an adorable, chubby tween, I secretly read a book about a fat girl.

Ok, let me unpack that. I was an adorable, chubby tween. I was so cute, it would physically hurt you to look at me. I would provide you photographic proof, but I have none, because despite my ridiculous adorableness, I hated my appearance so much that I have done my best to eliminate all evidence that I was ever 12 years old. I inherited my self-loathing from my family, to whom I was “too fat” at age seven. I internalized that message and it led to an intense eating disorder, symptoms of body dysmorphic disorder and obsessive-compulsive disorder, and a generally miserable adolescence. There were some other factors, but this was a big one.

What generally got me through my crappy adolescence was reading. I was a secret reader – my father did not approve of reading for enjoyment, so there was lots of sneaking out to the library and hiding novels in my youth. But reading did not help me when it came to being a fat girl.  I read exactly one book about a fat girl, and her skinny male best friend. She wants to be a cheerleader (or, rather, her mother wants her to be a cheerleader), but she is too fat! He wants to play baseball (read: father wants scrawny son to be a man), but he is too skinny! The chapters alternate viewpoints, so the reader gets to experience a rundown of both characters’ exercise and diet regimes of the summer, and then, *poof!* fat girl = sexy cheerleader, skinny boy = sexy baseball player, and they fall in love.

This was not my life. It was not going to be my life. I was already a cheerleader –the second fattest girl on the squad, with the highest front kick and the only Russian split. I wasn’t going to eat hardboiled eggs for breakfast and do aerobics videos for a summer and find love in the fall. This book, and the author, became one more voice telling me I was not lovable as I was, and change felt impossible. If books about kids like me existed, I didn’t know about them. And that’s what’s so exciting about Fat Angie.

What I loved… I really loved reading this book. I devoured it; it took me about two days. Angie’s discomfort – with herself, with social interaction, with her family – was palpable. The story is told in the third-person, which I find rare in YA and I really enjoy. I like the sort of complicated narrator – very close to Angie and with its own personality. The book is unflinchingly real. The depictions of bullying and humiliation are difficult to read, because they’re very true to life. There are moments I wanted to shut the book or skip forward, almost unable to watch as Angie is tormented and no one will, or can, help her. Not to say that Angie does not have allies, in her gym teacher and her neighbor, Jake (with a dog named Ryan! I see what you did there, C-T.), but the author does not mess around with the loneliness of Angie’s life. That’s hard to capture, and she does it well.

The character of Angie’s mother is amazing, and terrifying, and infuriating. And everyone I spoke to who grew up with parents like this – either focused on presenting the picture of a “perfect” or “normal” family, or focused on not having a fat kid – heard or read the things Angie’s mother says to her and proclaimed “YAAAS!” I mean, probably they used real words, but I know what they meant. Charlton-Trujillo pins to the page the cruelty disguised as “honesty” or “helpful criticism,” and how helpless Angie feels before she meets KC. This novel does not shy away from what is real, and tough, and hard to look at, and I admire that.

What I didn’t love… For all the things Charlton-Trujillo does well, and makes real, there’s a fair amount of shallow. There were a ton of little details that piqued my interest but were never explored or dropped altogether, and there are some characters so shallowly rendered that they end up feeling superfluous: Angie’s bad therapist, Wang’s bad therapist, Wang himself.  The brief flash of insight into the life of Angie’s chief tormentor is quickly dropped, which is a shame. I found this sliver of story so fascinating, not because it made the character any less of an insane bully, but because it said a lot about this community that I didn’t know. The book is set in suburban Ohio, and when I learned, in a split-second, that Angie’s bully has a family member in the Army, too, it made me wonder about this community and how war has affected it. It felt like a missed opportunity to give Angie’s sister’s story more depth. And for reasons too numerous to list, the big reveal of KC’s drama comes off as a pretty ridiculous scene. Unfortunately, Fat Angie attempts to take on a lot in one book, and in some ways the story suffers for it.

Lastly, Angie’s weight. Although it seems for a while that it’s not going there, this is again a story in which the fat character gains love and acceptance through weight loss.  I was happy when she started losing weight, absolutely proud of her. But I think Charlton-Trujillo could have made it clearer that: 1. A person can be fat, and physically active, and athletically capable, and 2. Love and acceptance can come to you at any size. Even Angie’s romantic interest is described as seeing the Angie inside, not the Fat Angie outside – that’s not the same as someone being interested in you or loving you as you are.

If I were an editor… There’s a lot of clumsy writing here. Charlton-Trujillo is a fan of Joss Whedon, and so I’d hoped for better banter, but the slang the kids use never seems to fit in their own mouths. The narrator makes some weird moves, too, sometimes seeming to tire of saying “Angie” and so replacing her name with “the obese girl,” or something similar. That’s very weird to read, and it took me out of the world of the book every time. The repetition of phrases or names that maybe the author wanted to become catchy – Angie’s couldn’t-be-bothered mother, or the Italian soda she drinks at the coffee shop, for example – actually made them less meaningful, and somewhat tedious to read.

As a teacher… Fat Angie will have a very comfortable home in my classroom this year. I’m going to book talk the heck out of it for Independent Reading. Independently, it’s a high school book, maybe acceptable for a savvy 8th grader, but I can only think of a handful of 9th graders I would give this to. The 10th graders I just taught, on the other hand, would do great with this book. It is intense. There is violence, vivid depictions of bullying at school and emotional/verbal abuse at home, cutting, loss and death.

This would make an excellent text for book clubs or literature circles in the classroom, maybe for lit circles around bullying, or underrepresented voices, or challenging assumptions/stereotypes. A whole-class activity that sprang to mind would be taking an excerpt of one of the bullying scenes and analyzing this as a class. The discussion of how to react to bullying could be so powerful and rich, a great addition to a unit on the topic of bullying, or examining our roles and responsibilities in society, etc. I cannot wait to talk to students about this book!

For more kid-friendly titles that feature fat characters, check out this awesome post from the archives of Shapely Prose. & definitely check out e. E. Charlton-Trujillo’s site!

a blog about growth, of muscles & mindset

I am a reader, a teacher, a writer, a thinker, a reviewer, and a dreamer of dreams.

A meeting place for a world of reflective writers.

sharpread
To Make a Prairie

A blog about reading, writing, teaching and the joys of a literate life

A community of readers